Time to post something! I’ll admit I’ve been bad about posting lately. Too many distractions I guess. Yes, I suffer from shiny object syndrome… SQUIRREL!! I have posted some pics and quick updates on the Facebook page.

So a few new favorite things…

on sale for $1.99 last week (and $0.99 this week) I tried making a few drinks. My first was a Pineapple Martini which was quite tasty but the one that wins is the Pineapple Sangria. Fresh Pineapple, White wine (I used Bota Box Chardonnay), blood orange italian soda, and pear liqueur. Serve over ice and top with Topo Chico.

2. Topo Chico – Sparkling mineral water with less sodium than most other sparkling waters i’ve tried. Great to sip or mix. This stuff has serious bubbles!

3. KARLSÖ – IKEA’s 13′ patio umbrella is only $99. This provides some serious shade for the pool or patio in addition to being tall enough that even the tall people don’t hit their head when walking under it.

4. Ben & Jerry’s Greek Frozen Yogurt – So far I’ve only tried the Blueberry Vanilla Graham and the Strawberry Shortcake. Both were very good but I preferred the Strawberry Shortcake. I’ve got the PB Banana in the freezer waiting for a taste test and I have on good authority (from my sister) that the Raspberry Fudge Chunk is a winner too. I think theses are running 5-7g of fat per serving. It makes a fat-boy Friday binge a little less guilt inducing.

Ok… so enough of that… last night’s dinner  was ground pork tacos. A slight switch from my normal ground turkey tacos since I still have a ton of pork in the freezer from Wilbur2012. It’s a simple recipe. Brown pork (or turkey or beef), add one can of fat free refried beans (i use one can per pound of meat), taco seasoning, and bottled taco sauce (to taste) cook together on low heat. 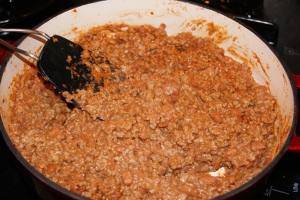 The tacos were topped with non-fat Greek yogurt, diced yellow tomato, guacamole, sprouts, and a bit of cheese… they were deelish!

Tonight is round two and since I bought the 800 pack of flour tortillas at Costco today (ok it’s actually only 40-count) I decided to try to make mini salad shells (baked, not fried). 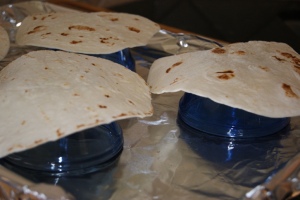 These are the small flour tortillas so i had to find something to help shape them that was oven proof. My first attempt was small Pyrex bowls. I set the over to 400 degrees, convection bake, and put a light mist of olive oil on each side. The tortillas were a little too small and thick to really curve around the bowl and get the desired shape. Also the surface area that was resting on the bottom of the bowl (combined with the olive oil) left the center soft and not crisp. Baking longer likely would have just led to the edges burning.

Next I tried a muffin tin. It was the standard 12-cup, non stick variety. I flipped it over and put three tortillas in between the cups. I skipped the olive oil mist on these. This made a much better shape and allowed the centers to brown and crisp as well. I could only bake 3 at a time but at 10 minutes per batch it didn’t take long to whip out more than enough for dinner.