So after last weekends adventures with Cinnamon Roll Waffles I decided to do another Saturday morning breakfast experiment. Let me back up… last weekend, after seeing a Pinterest posting, I made cinnamon rolls on the waffle iron. I used canned cinnamon rolls (Pilsbury Grands) and it seemed like a pretty simple idea. 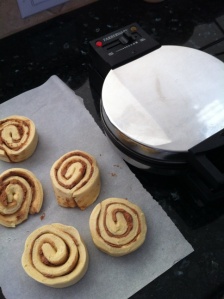 First, I’d let the cinnamon rolls sit out of the can for at least 10 or 15 minutes to soften a little. Second, put your waffle iron on a low to medium-low setting. This will help prevent the outside from burning too quickly and allow the inside to cook enough to not be gummy. Third, make sure to spray the waffle iron with cooking spray otherwise they stick.

The cinnamon rolls were in a can of five and I decided to cook them one at a time so I could monitor cooking time and temperature. I also only have a standard, round waffle iron and I thought they would get too crowded. I think you could also use the smaller cinnamon rolls and cook multiple at once. As each one came off the iron I spread a little butter on the top and then, after the butter melted, did a light drizzle of the icing. (Note: I only ended up using about half the frosting tub for all 5 waffles and I warmed it slightly and put in a zipper bag that I used to pipe it on).

So today I was going to try to hash browns on the waffle iron. I saw the idea on Pinterest as well and thought it looked cool. Prior to my adventure I took the diva dog for a walk and started thinking about how to amp it up bit and here is what I ended up with.

First, I took refrigerated shredded potatoes and tossed them with a little salt and pepper and a bit of olive oil (I used a natural butter flavored EVOO). I decided instead of the waffle iron I was going to use the Panini press with the flat grates. I started with two mounds of hashbrowns which I cooked until they started to get a little brown. Next I put one egg each (now flattened) pile. I let the egg cook a minute or so with the Panini press closed and then added a slice of cheese to each one and a slice of standard lunch meat ham. In my mind i wanted to use bacon but I didn’t have any on hand (bad Jim). I cooked the entire thing another few minutes and the result was a breakfast stack that turned out pretty darn tasty.

2 thoughts on “Breakfast and the small appliance…”